Here I am going to introduce you to a 220V LED driver control circuit without a transformer. In this project; only 5 LEDs are used. You can specify the number of LEDs according to your requirement. The major plus point of such circuits is that we can reduce the size and cost of the circuit due to the absence of power transformers.

Since we know the effective mechanisms of LEDs as they are inexpensive, cool, efficient and low energy consumption. So, in other sense, we can reduce our current consumption and in turn electricity bill to a large extent. This circuit uses 220/230 V & 50 Hz AC power supply, so be careful while analyzing and solving serious problems of the project.

The circuit essentially consists of 5 LEDs, a bridge rectifier and a filter network with a voltage regulator. The bridge rectifier is used to convert alternating current (AC) to direct current in form of pulses. It is possible with the help of rectifier diodes (D1 to D4 1N4007).

The filtration is performed by use of a capacitor of about 47uF capacitance. It is used to eliminate the ripples/pulses from the rectified current.

After regulation of filtered output by using a Zener diode, the result is almost direct current which is suitable for LEDs. 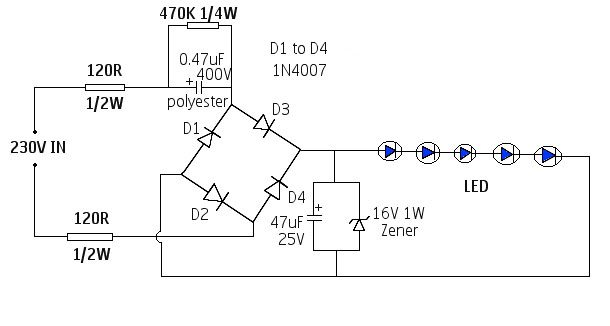 How to choose appropriate desklamp